Four-time GRAMMY® award-winning Australian duo and Curb | Word Entertainment recording artist for KING & COUNTRY announces its first ever full-length Christmas album, ‘A Drummer Boy Christmas’, due out on October 30th. You can pre-save, pre-add, and, pre-order the album HERE.

Joel and Luke Smallbone – the brothers that make up for KING & COUNTRY reflect,

“The miracle of Christmas captivated us long ago and has been laced into the DNA of the band. We felt it was the imperfectly perfect time for us to do our small part in telling the story of the redemption that Christmas offers to all of us. So, bake those chocolate chip cookies, make a little hot chocolate, strike up that cosy fire, and let us take you on a 44 minute and 49 second musical Christmas journey to celebrate the greatest story the world has ever known!”

The album stems from a concept that originated near the start of the band, as rehearsals for a Christmas tour sparked the musical imagination of Joel and Luke Smallbone. Executive produced by GRAMMY® winning musician and producer Aqualung (Matt Hales) and orchestrally arranged by Davide Rossi, of Coldplay fame, ‘A Drummer Boy Christmas’ includes 13 tracks and features two original Christmas songs entitled, ‘Heavenly Hosts’, and an emotionally moving ballad from Joseph’s perspective, ”A Carol of Joseph’. ‘A Drummer Boy Christmas’ was produced by Tedd T. and for KING & COUNTRY and co-produced by Benjamin Backus.

With their most recent multi-week No. 1 hit, ‘TOGETHER’ (feat. Kirk Franklin and Tori Kelly), climbing into the Top 25 on the mainstream Hot AC chart, the duo has more exciting news to share.

for KING & COUNTRY celebrates the outstanding honour of one billion total on-demand streams. Since 2012, for KING & COUNTRY has racked up seven No. 1 hits (many of them multi-week No. 1s on multiple charts), four GRAMMY® wins, a platinum single, high-energy nationally televised performances, and sold out shows all over the world. 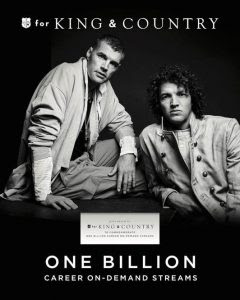 Four-time GRAMMY® award-winning Australian duo, for KING & COUNTRY, comprising brothers Joel & Luke Smallbone, have released a new chart-topping hit ‘TOGETHER’, a song about the strength of unity in the face of adversity. Earlier in 2020, in response to the COVID-19 pandemic, the duo hosted the critically acclaimed livestream event ‘TOGETHER: A Night of Hope’, to over 2.5 million viewers across all social media platforms. After collaborating with renowned entertainer Dolly Parton to release a version of the duo’s 11-week No. 1 hit, ‘God Only Knows’ in 2019, the duo won two 2020 GRAMMY® awards. ‘God Only Knows’ (with Dolly Parton), won in the Contemporary Christian Music Performance/Song category, and their 3rd studio album, ‘burn the ships’, won a GRAMMY® in the Contemporary Christian Music Album category.

for KING & COUNTRY graced the CMA stage to perform, ‘God Only Knows’ with the incomparable Dolly Parton at the CMA awards, and they performed their unique and powerful rendition of ‘Little Drummer Boy’ at ‘CMA Country Christmas’, receiving national critical praise for both. They have garnered seven No. 1 hits, ten Top 10 hits, six GRAMMY® nominations, three Billboard Music Award Nominations, an American Music Award nomination, and had songs featured on the Emmys, Super Bowl, Sunday Night Football and other high-profile events.

National television performances include ‘Good Morning America’, ‘The Tonight Show’, ‘TODAY’, ‘Jimmy Kimmel Live!’, ‘The View’, ‘CMA Awards’, and ‘CMA Country Christmas’. The duo’s ‘burn the ships | world tour’ has sold out over 40 shows across the world including USA, Australia, Germany, Netherlands, and New Zealand. In total, for KING & COUNTRY has accumulated over one billion on-demand streams.

For more information on for KING & COUNTRY, go to: www.forkingandcountry.com

"British TV presenter, singer/songwriter, and a woman who can do it absolutely nailed the current trend. ‘Flipside’ is much more than a party song as the singer features some of her most empowering lyrics yet." @EssentiallyPop
Listen https://www.youtube.com/watch?v=uKn_ILqaUlQ
#nowplaying #80svibes

Chace Leaves The Decision Up To Us When He Says ‘Up 2 You’ In His New Single https://essentiallypop.com/epop/2022/01/chace-leaves-the-decision-up-to-us-when-he-says-up-2-you-in-his-new-single/

NOAHFINNCE has released his first song and music v

As much as we want to feel connected to an artist,

If there’s one thing that Marc DiNero has, it’

Essentially Pop not only reports on all your old and new favourites, but features and promotes up and coming artists.

Belfast born singer-songwriter and producer Gareth Dunlop was fortunate enough to remain a busy man during the global pandemic.
View on Facebook
· Share

From Shondaland Creator Chris Van Dusen, the second season of Bridgerton follows Lord Anthony Bridgerton (Jonathan Bailey), the eldest Bridgerton sibling and Viscount, as he sets out to find a suitabl...
View on Facebook
· Share

With the advent of all sorts of new and exciting interface technologies, we've never been more connected....essentiallypop.com/epop/2022/01/stay-connected-exciting-interface-technologies/ ... See MoreSee Less

With the advent of all sorts of new and exciting interface technologies, we've never been more connected.
View on Facebook
· Share

Sophie Ellis-Bextor will bring her Kitchen Disco from the screen to the stage this March, with her highly-anticipated Kitchen Disco Tour 2022....essentiallypop.com/epop/2022/01/coming-soon-sophie-ellis-bextor-kitchen-disco-tour-march-2022-spe... ... See MoreSee Less

Sophie Ellis-Bextor will bring her Kitchen Disco from the screen to the stage this March, with her highly-anticipated Kitchen Disco Tour 2022.
View on Facebook
· Share